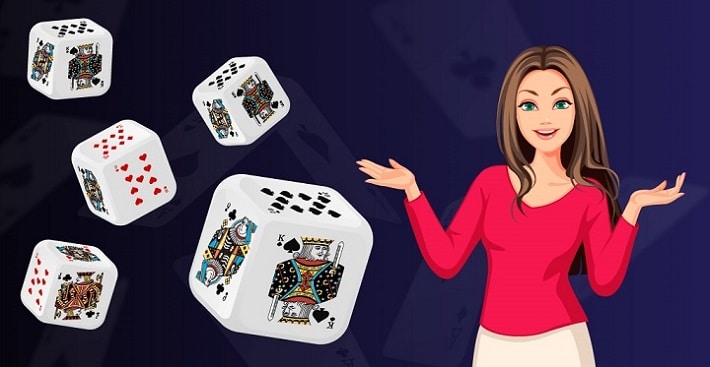 Poker games involve playing a card with five dice with each face having card pictures printed. Few games which are played with a set of poker sided dice involve making, and rolling combinations of the poker hand and the resultant dice face like three-of-a-kind, one pair, five of a kind, and four of a kind, etc.

All the Poker Dice games

Given below is the list of games that can be played by using a set of poker dice.

Card game with dice is played with a pair of five dice, each having the cards such as Ace, Queen, King, Jack, 10 & 9 printed on the 6 faces (rules of poker dice are different).

Similar to poker dice with a few differences, Boss or Bull Dice is played among two players who each play with a dice cup and five dice.

Played by kids and adults alike, Cubilete is a traditional Cuban game played with a set of 5 poker dice. Poker dice game is like a player playing cards that have Ace, Queen, King, Jack, 10 & 9 imprinted on six faces; however, it can simply be played with a set of five standard common dice. If it is played as a drinking game, the losers buy the drinks for the winners.

Liar Dice is a game of bluff and counterbluff, and is typically played with a pair of five poker dice. As a rule, players are needed to keep their dice hidden from players, hence throwing a cup is suggested.

Klondike is also known as Counter Klondike. Whenever it is played on a shop counter, and If played in Casino, it is known as Casino Klondike. This is a betting game played in cheap casinos in frontier America, by using five dice. The hands (from full house hand which is three of a kind with a pair, royal flush and more, any one hand wins out of total 10 while playing card dice game) or combinations that are used are like Poker dice or Indian Dice game, with certain exclusions (rules for poker dice may vary).

To conclude, the above-mentioned games are interesting for a player for playing card games or dice poker. Before proceeding with any of the games, try to read the entire accompanying rule book (if you have brought a kit) and then proceed.