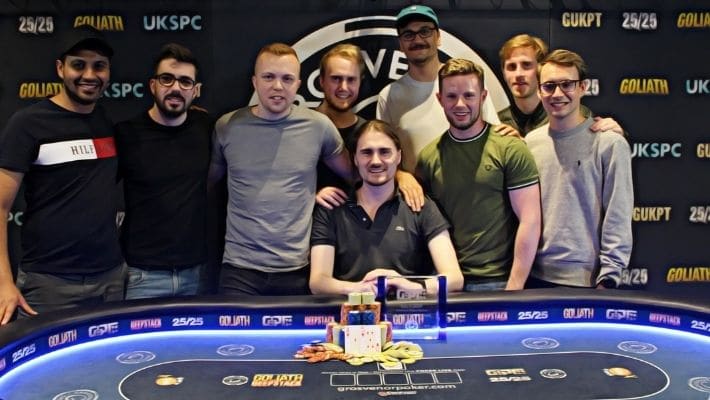 The lockdown restrictions that were enforced had withheld British players from taking part in the poker matches.

Just as restrictions were eased, the Grosvenor UK Poker Tour (GUKPT) Main Event was flooded with an entry of 591 players that created a prize pool worth £650,100. The prize amount was shared among the top 57 players of the tournament.

The ALL-In trends in the Money Bubble:

The money bubble burst in the middle of the second day of the tournament in a unique style. During the first instance, three all-ins were recorded, in which the Sam Miller crashed the Daniel Crawley-Boevey’s aces with his queens.

Whereas Michael Warton could not beat Phil Long’s aces with his kings and Yiannis Liperis cracked the Michelis Michael’s queens with his tens. As a result, Warton and Boevey won £950 each, and many others also received good returns on their investments.

The champions of Michael Zhang and Lawrence Houghton’s main event won £3800 and £ 5750, respectively, at 25th and 13th positions.

All the nine players who made it to the final table were able to lock in a minimum of £ 8900. However, it was Aleem Kanji who bagged the sum as the first casualty of the final table.

After the elimination of Chris Jhonson with £41,450, the final four were reduced to just three, yet nobody was interested in making a deal as now the goal was shifted to a six-figure sum.

Next to crash out of the game was Danny Pyke with £ 67, 500 after which only McNicholas and Tadas Budzeika were left for the finals.

The difference between the first and the second spot was £51,750, but since the deals lacked, Budzeika was consolidated with £114,050, which made McNicholas win the prize money of £165,800.

The Surprising Turn of Events:

Before this event, McNicholas had only £ 141 winnings in the poker tournament, another £ 41 win in a poker event in October, and after three months, a £ 100 prize, both from Dusk Till Dawn, a low stake poker event.

After a small win, £165,800 is a staggering amount, and many hope that more such wins will be seen in the future on the part of McNicholas.

The GUKPT will be back in motion in Manchester from the 5th of August and will continue till the 15th with a buy-in value of £ 1,350 for the main event.